Poland’s history is an immense tale. Forever sandwiched between two powerful and aggressive neighbors, it has over the past millennium defended its freedom and sovereignty on innumerable occasions, only to be overrun and subjugated to occupation by foreign powers time and time again. It has gone from being the largest country in Europe to completely disappearing off the world map, and seen its population devastated in two world wars. Yet it is testament to the astounding resilience of the Polish people that Poland has not only bounced back from every crushing blow but also had the energy to hold strong to its own culture. 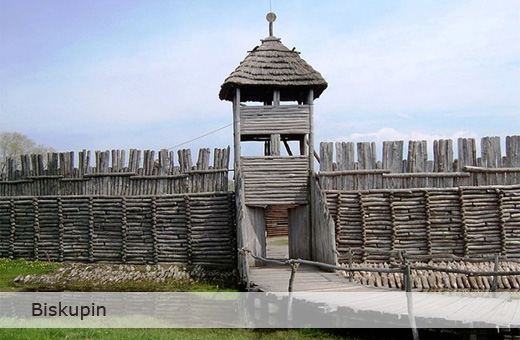 Although the exact date of the arrival of the first Slavic tribes is unknown, historians agree that the Slavs began settling the area between the 5th and 8th centuries. From the 8th century onwards, smaller tribes banded together to form greater conglomerations, thus establishing themselves more fully on the lands of the future Polish state. The country’s name derives from one of these tribes, the Polanie (literally, ‘the people of the fields, open-country dwellers’), who settled on the banks of the Warta River near present-day Poznań. Their tribal chief, the legendary Piast, managed to unite the scattered groups of the surrounding areas into a single political unit in the 10th century, and gave it the name Polska (later Wielkopolska, meaning Great Poland). It wasn’t until the coming of Piast’s great-great grandson, Duke Mieszko I, that much of Poland was united under one dynasty. 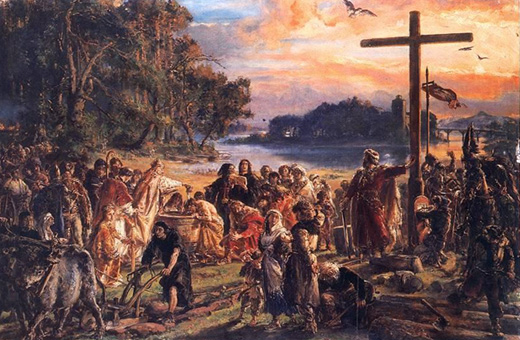 After Duke Mieszko I converted to Christianity, he did what most early Christian rulers did and began conquering the neighbors. Soon the entire coastal region of Pomerania (Pomorze) fell under his sovereignty, along with Śląsk (Silesia) to the south and Małopolska (Little Poland) to the southeast. By the time of his death in 992, the Polish state was established within boundaries similar to those of Poland today, and the first capital and archbishopric were established in Gniezno. By that time, towns such as Gdańsk, Szczecin, Poznań, Wrocław and Kraków already existed. Mieszko’s son, Boleslaw the Brave, continued his father’s work, even pushing the Polish border as far east as Kyiv. His son, Mieszko II, was less successful in the conquering department, and during his reign the country experienced wars in the north and a period of internal fighting within the royal family. The administrative center of the country was moved from Wielkopolska to the less vulnerable Małopolska, and by the middle of the 11th century, Kraków was established as the royal seat.

When pagan Prussians, from the region that is now the northeastern tip of Poland, attacked the central province of Mazovia in 1226, Duke Konrad of Mazovia called for help from the Teutonic Knights, a Germanic military and religious order that had made its historic mark during the Crusades. The knights soon subjugated the pagan tribes but then bit the hand that fed them, building massive castles in Polish territory, conquering the port city of Gdańsk (and renaming it Danzig), and effectively claiming all of northern Poland as their own. They ruled from their greatest castle of all, at Malbork, and within a matter of decades became a major European military power. 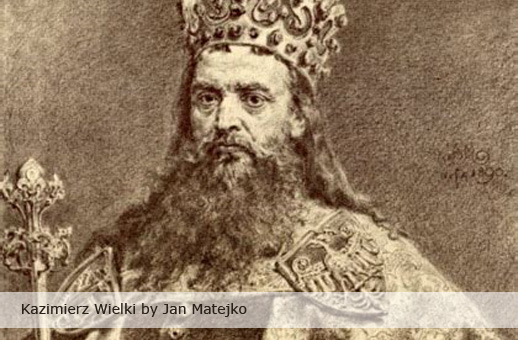 Not until 1320 was the Polish crown restored and the state reunified. It was under the rule of Kazimierz III Wielki (Casimir III the Great; 1333–70) that Poland gradually became a prosperous and powerful state, despite concessions being made to Bohemia in the southwest and the Teutonic Knights in the north. Kazimierz Wielki regained suzerainty over Mazovia, then captured vast areas of Ruthenia (today’s Ukraine) and Podolia, thus greatly expanding his monarchy towards the southeast.

Kazimierz Wielki was also an enlightened and energetic ruler on the domestic front. Promoting and instituting reforms, he laid down solid legal, economic, commercial and educational foundations. He also passed a law providing privileges for Jews, thus establishing Poland as a safe house for the Jewish community for centuries to come. Over 70 new towns were founded, and the royal capital of Kraków flourished. In 1364 one of Europe’s first universities was established at Kraków, and an extensive network of castles and fortifications was constructed to improve the nation’s defenses. There is a saying that Kazimierz Wielki ‘found Poland built of wood and left it built of stone’. 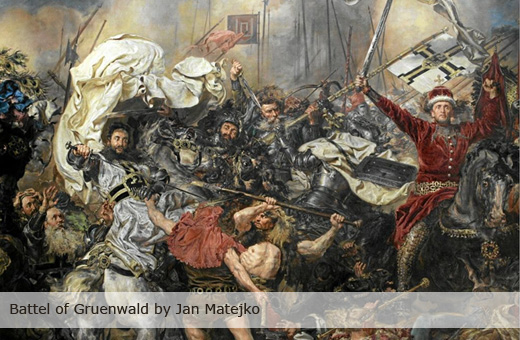 The close of the 14th century saw Poland forge a dynastic alliance with Lithuania, a political marriage that increased Poland’s territory five-fold overnight and that would last for the next four centuries. The union benefited both parties – Poland gained a partner in skirmishes against the Tatars and Mongols, and Lithuania received help in the fight against the Teutonic Knights. Under Władysław II Jagiełło (1386–1434), the alliance defeated the Knights and recovered eastern Pomerania, part of Prussia and the port of Gdańsk, and for 30 years the Polish empire was Europe’s largest state, extending from the Baltic to the Black Sea.

But it was not to last. Threat of invasion became apparent towards the end of the 15th century – this time the main instigators were the Ottomans from the south, the Tatars of Crimea from the east, and the tsars of Moscow from the north and east. Independently or together, they repeatedly invaded and raided the eastern and southern Polish territories, and on one occasion managed to penetrate as far as Kraków. Despite this, the Polish kingdom’s power was firmly established and the country advanced both culturally and spiritually. The early 16th century brought the Renaissance to Poland and during the reigns of Zygmunt I Stary (Sigismund I the Old; 1506–48) and his son Zygmunt II August (Sigismund II Augustus; 1548–72), the arts and sciences flourished. This was Poland’s golden age, which spawned the likes of Nicolaus Copernicus.

The bulk of Poland’s population at this time was made up of Poles and Lithuanians but included significant minorities from neighboring countries. Jews constituted an important and steadily growing part of the community and by the end of the 16th century Poland had a larger Jewish population than the rest of Europe combined.

On the political front, Poland evolved during the 16th century into a parliamentary monarchy with most of the privileges going to the szlachta (gentry, the feudal nobility), who comprised roughly 10% of the population. In contrast, the status of the peasants declined, and they gradually found themselves falling into a state of virtual slavery.

Hoping to strengthen the monarchy, the Sejm (the parliament) convened in Lublin in 1569, unified Poland and Lithuania into a single state, and made Warsaw the seat of future debates. Since there was no heir apparent to the throne, it also established a system of royal succession based on direct voting in popular elections by the nobility, who would all come to Warsaw to vote. In the absence of a serious Polish contender, a foreign candidate would be considered. 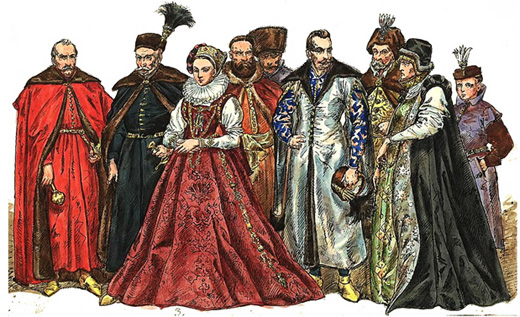 From the very beginning, the experiment proved disastrous. For each royal election, foreign powers promoted their candidates by bargaining and bribing voters. During this period, no fewer than 11 kings ruled Poland; only four were native Poles. 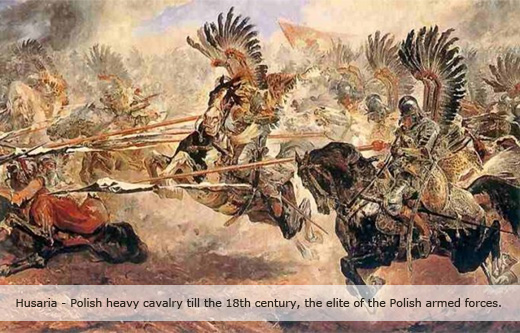 The first elected king, Henri de Valois, retreated to his homeland to take up the French crown after only a year on the Polish throne. His successor, Stefan Batory (Stephen Bathory; 1576–86), prince of Transylvania, was a much wiser choice. Batory, together with his gifted commander and chancellor Jan Zamoyski, conducted a series of successful battles against Tsar Ivan the Terrible and came close to forming an alliance with Russia against the Ottoman threat.

After Batory’s premature death, the crown was offered to the Swede Zygmunt III Waza (Sigismund III Vasa; 1587–1632), and during his reign Poland achieved its greatest extent ever (1610 - Polish army conquered and occupied Moscow) , more than three times the size of present-day Poland. Despite this, Zygmunt is best remembered for moving the Polish capital from Kraków to Warsaw between 1596 and 1609. 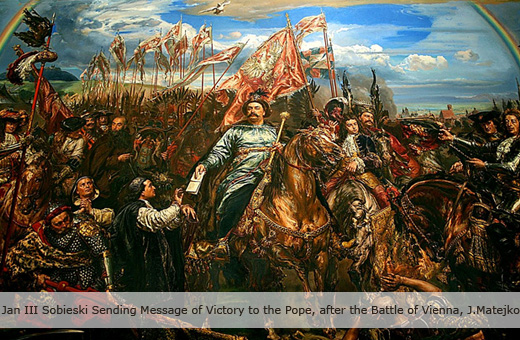 The beginning of the 17th century marked a turning point in Poland’s fortunes. The increasing political power of the Polish nobility undermined the authority of the Sejm; the country was split up into several huge private estates, and nobles, frustrated by ineffective government, resorted to armed rebellion.

Meanwhile, foreign invaders were systematically carving up the land. Jan II Kazimierz Waza (John II Casimir Vasa; 1648–68), the last of the Vasa dynasty on the Polish throne, was unable to resist the aggressors – Russians, Tatars, Ukrainians, Cossacks, Ottomans and Swedes – who were moving in on all fronts. The Swedish invasion of 1655–60, known as the Deluge, was particularly disastrous.

The last bright moment in the long decline of the Royal Republic was the reign of Jan III Sobieski (John III Sobieski; 1674–96), a brilliant commander who led several victorious battles against the Ottomans. The most famous of these was the Battle of Vienna in 1683, in which he defeated the Turks and checked their advancement into Western Europe.